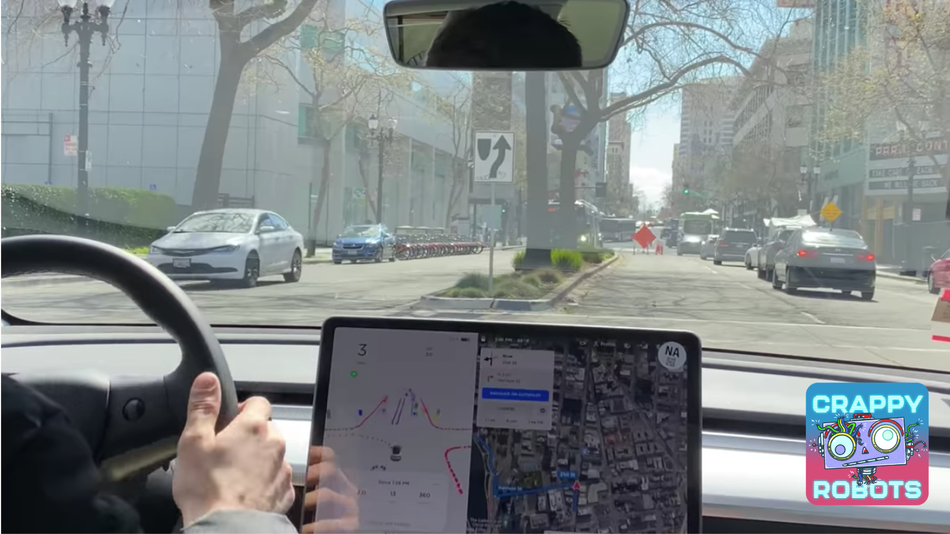 From the robots that fail miserably at their jobs to the robots dealing with our literal crap, Mashable’s Crappy Robots dives into the complex world of automation — for better or worse or much, much worse.

Tesla’s current advanced driver assistance system, Autopilot, has been a standard add-on feature in its electric cars since 2014. It’s been filmed in countless home videos, with the computer appearing to perform flawlessly as it keeps the car centered in a lane, slows down, even changes lanes and exits the freeway.

Since a beta program for its more advanced Autopilot configuration, Full Self-Driving mode (FSD), arrived in October, however, a select group of users with early access has shown what the next level of the autonomous system can (and can’t) do.

It’s not ready for prime time.

The biggest problem is FSD now allows the Autopilot system to work on any city street, not just on highways and major thoroughfares. The FSD video we mentioned above that shows it in action is anything but smooth. It was taken in March on the streets of Oakland, California, by vlogger AI Addict, with a driver and front-seat passenger (see below).

Driving through downtown Oakland is nothing like the wide boulevards and predictable traffic patterns of suburbia. The Tesla, it seemed, didn’t know what to do with itself.

In FSD mode, the car seems overly cautious and freaked out by every small thing. The driver and  passenger at one point note to each other, “It acted very drunk there.” At another moment, the car just stops, while at another it gets way too close to oncoming traffic as it’s trying to make room for a bicyclist.

At one point, the car goes into a left-turn only lane but continues driving straight toward a line of parked cars.

It’s a harrowing 13 minutes. The car gets honked at for taking turns too slowly and stopping too much, usually because it seems to think a pedestrian is nearby. “People around us getting very impatient,” the riders comment.

The driver takes over a few times, once because the Tesla was not going to make it across an unprotected left turn. It’s hard to watch. “Oh god, go, go, go,” one of the riders says.

The theme of the ride, in short, is confusion (the Tesla) and frustration (the humans).

Other beta users have had similarly glitchy experiences with FSD out in the real world.

In an aptly named video from February, “FSD BETA isn’t quite ready for SF (yet),” we see how the city problem is just that — very much a problem. Tesla is still letting users turn on FSD in the middle of dense, urban spaces even when the system clearly can’t handle erratic pedestrians, unclear lane markings, and the general chaos that is driving in San Francisco’s North Beach and Chinatown neighborhoods, as seen below.

Tesla does have a California DMV autonomous testing permit that requires a person behind the wheel when this mode is in use. It’s the only autonomous car company that tests its system with users, however, instead of employees or contractors.

Even in a less hectic situation, the car has been recorded while unable to handle a tricky turn:

To be fair, there are moments where FSD performs as it should. But, given all the videos of erratic behavior we’ve seen, it’s clearly not reliable enough to be thrown into any scenario.

FSD is constantly being updated and adjusted, so the version those two Oakland testers were driving had already changed when the same vloggers took the Tesla in FSD mode out again two weeks later in San Jose, California. It still struggled in the urban environment with left-hand turns and getting into the correct lane, but the vloggers noticed improvements with detecting pedestrians and maintaining more space between other vehicles.

According to Tesla CEO Elon Musk, an upcoming FSD update will “blow your mind” with adjustments he assures the system has “learned,” after more rides in the past six months have provided more data.

But even attempts to show off FSD’s abilities inadvertently reveal its shortcomings. See below: the slowest U-turn ever.

Musk has promised a subscription option to open up FSD to any Tesla owner who pays for it. The rollout has been delayed, but the specter of widespread use has caught the attention of regulators.

The National Highway Traffic Safety Administration, or NHTSA, said the agency had been briefed on the new feature. In a statement to Reuters last month, NHTSA officials said it would “monitor the new technology closely” and “not hesitate to take action to protect the public against risks to safety.”

At the end of April, Pete Buttigieg, the U.S. secretary of transportation, hedged on the topic of Tesla’s FSD abilities during an Axios presentation. But he acknowledged, “No matter how sophisticated the technology … we expect and require an attentive driver at the wheel.” He emphasized that advanced driving systems like Autopilot are meant to assist drivers, not replace them.

Tesla vs. everyone else

Other autonomous assistance systems work differently than Tesla’s FSD. First of all, other options out there don’t allow users to turn on the driver assistance on any road. Most only function on certain stretches of highway that the companies have mapped out.

Nissan’s ProPilot Assist system works similarly to Autopilot in that it can be used on major streets off the highway. But you can’t use it on smaller city streets.

We reached out to Tesla about the problems with its FSD beta, but the company no longer has a press team and we haven’t received a response.

Ford’s new system, BlueCruise, is more like General Motors’ Super Cruise feature. Both use eye-tracking to make sure drivers are still paying attention while the car cruises down the highway. Tesla’s system doesn’t appear to monitor the driver beyond touch sensors in the steering wheel, as Consumer Reports recently demonstrated.

He didn’t miss the opportunity for an apparent dig at Tesla: “We tested it in the real world, so our customers don’t have to.”

Whether real-world videos of BlueCruise will give us as bad a stomachache as Tesla’s FSD performance on city streets did is yet to be seen.