As Russian military forces bombarded Ukraine, a congressional committee huddled to discuss progress on Artemis, the ambitious U.S. effort to put astronauts on the moon and Mars.

They didn’t discuss the raging war, but global tensions of the hour were certainly in the air.

“China and Russia have their sights set on the moon and its resources,” said Rep. Bill Posey, a Republican who represents Cape Canaveral in Florida. “Given what the moon represents in terms of resources, prestige, U.S. national security, what does the U.S. and NASA need to do to guarantee the success of the Artemis program in the coming years?”

NASA’s James Free, the agency’s associate administrator of exploration systems development, answered by talking about the growing number of countries signing the Artemis Accords, a U.S.-led international agreement on principles for human space exploration. He talked about focusing on “performance,” the schedule, and budget.

But Posey wanted to get down to brass tacks. To some people, this is a space race.

“For the record,” he said, referencing China’s growing lunar ambitions, including launching robots to the moon’s resource-rich south pole in the coming few years. “What is the China-Russia date?”

The potential obstacle standing in the way of the United States achieving the world’s first lunar outpost and Mars landing is NASA’s gargantuan rocket, the Space Launch System, or SLS. Taller than the Statue of Liberty at 322 feet and weighing 5.75 million pounds, the American rocket has 15 percent more thrust than the Saturn V rocket used during the Apollo program.

And it has a price tag to match, said Inspector General Paul Martin, who acts as the federal watchdog over the space agency. The cost to develop and operate SLS is so high, it imperils the entire deep spaceflight program, he said at the House Subcommittee on Space and Aeronautics hearing on March 1.

Until now, few had so publicly called out the elephant in the room.

“As NASA moves forward, it must accelerate these efforts to make Artemis programs more affordable,” Martin said. “Otherwise, relying on such an expensive single-use rocket system will, in our judgment, inhibit, if not derail, NASA’s ability to sustain its long-term human exploration goals to the moon and Mars.”

A rocket will crash into the moon. It’ll leave way more than a scar. 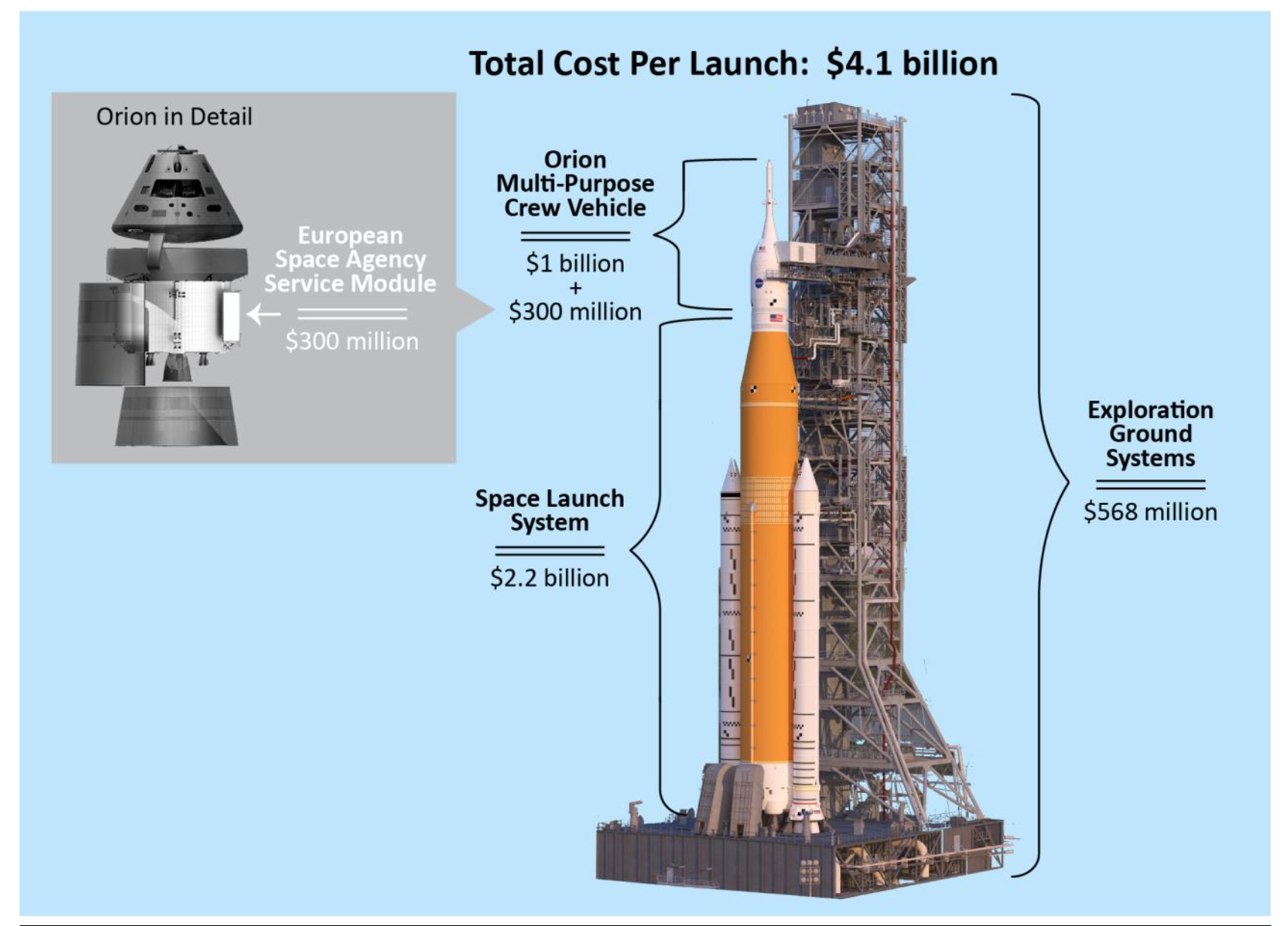 Though NASA has yet to detail its spending plan for the entire lifecycle of the program, the watchdog estimated the initial four missions will cost about $4.1 billion each, the first of which is an uncrewed test that could happen this spring or summer. For perspective, that’s about one-fifth of the entire NASA budget. Roughly half of the expense is the new rocket system. By 2025, the agency will have spent about $93 billion on Artemis, Martin said.

Those are sobering figures as the commercial space industry shows it could likely do the job cheaper. SpaceX’s Starship rocket, though still a prototype, is designed to be reusable, will carry heavy loads, and has the potential to launch more often than the single-use SLS rocket. The United Launch Alliance’s Vulcan Centaur rocket under development also might offer an alternative with a cheaper bottom line.

“Relying on such an expensive single-use rocket system will, in our judgment, inhibit, if not derail, NASA’s ability to sustain its long-term human exploration goals to the moon and Mars.”


The cost per launch does seem high, said Peter Beck, CEO of the commercial space company Rocket Lab, in an interview with Mashable: “I know what I could do for $4.1 billion, and it’s a lot.”

Such candid talk from NASA’s inspector general might lead one to think SLS could cripple the agency’s human space exploration program if the rocket isn’t scrubbed.

Yet despite its problems, the rocket isn’t going anywhere, experts say. Because if nothing else, the “elephant” was born a political animal.

“For at least the next 10 years, the SLS program is politically very, very secure, absent some sort of catastrophic failure,” Casey Dreier, senior space policy adviser for the nonpartisan Planetary Society, told Mashable.

Crucially, cost efficiency was never the priority. When Congress adopted the NASA Authorization Act of 2010, it directed the space agency to build the rocket.

SLS is literally and figuratively founded on the Space Shuttle legacy, which operated between 1981 and 2011. NASA has upgraded components of the shuttle for the new rocket, using a larger version of the shuttle stack that swaps out the legendary winged orbiter for either a cargo or crew capsule. The vehicle’s core rocket stage is a stretched shuttle fuel tank, powered by four shuttle main engines.

Rather than reusing those engines, though, NASA will ditch them in the ocean during the Artemis missions. Lightening the load enables the spacecraft to get on a moonbound trajectory.

House and Senate leaders, wanting to support their space industry constituents, legally required NASA to work with all the same contractors used for the shuttle. In 2010, during the Great Recession, those lawmakers sought to preserve thousands of jobs in their districts. About 1,100 U.S. companies and employees at every NASA center are now involved in the megarocket project.

The 2010 bill even told NASA to use the old “cost-plus contracts,” deals that pay the contractor for all of its expenses and then some to allow for a profit (as opposed to a “fixed cost contract” where the total budget is set). This model doesn’t create an incentive for the contractor to finish its work within a set time and budget. Despite poor performance from Boeing, for instance, NASA gave the company 86 percent of all available award fees for developing the core, Martin said, “despite being billions over budget and years behind schedule.”

“NASA was told what to build and told the kind of pieces to use,” Dreier said. “They couldn’t just start fresh.” 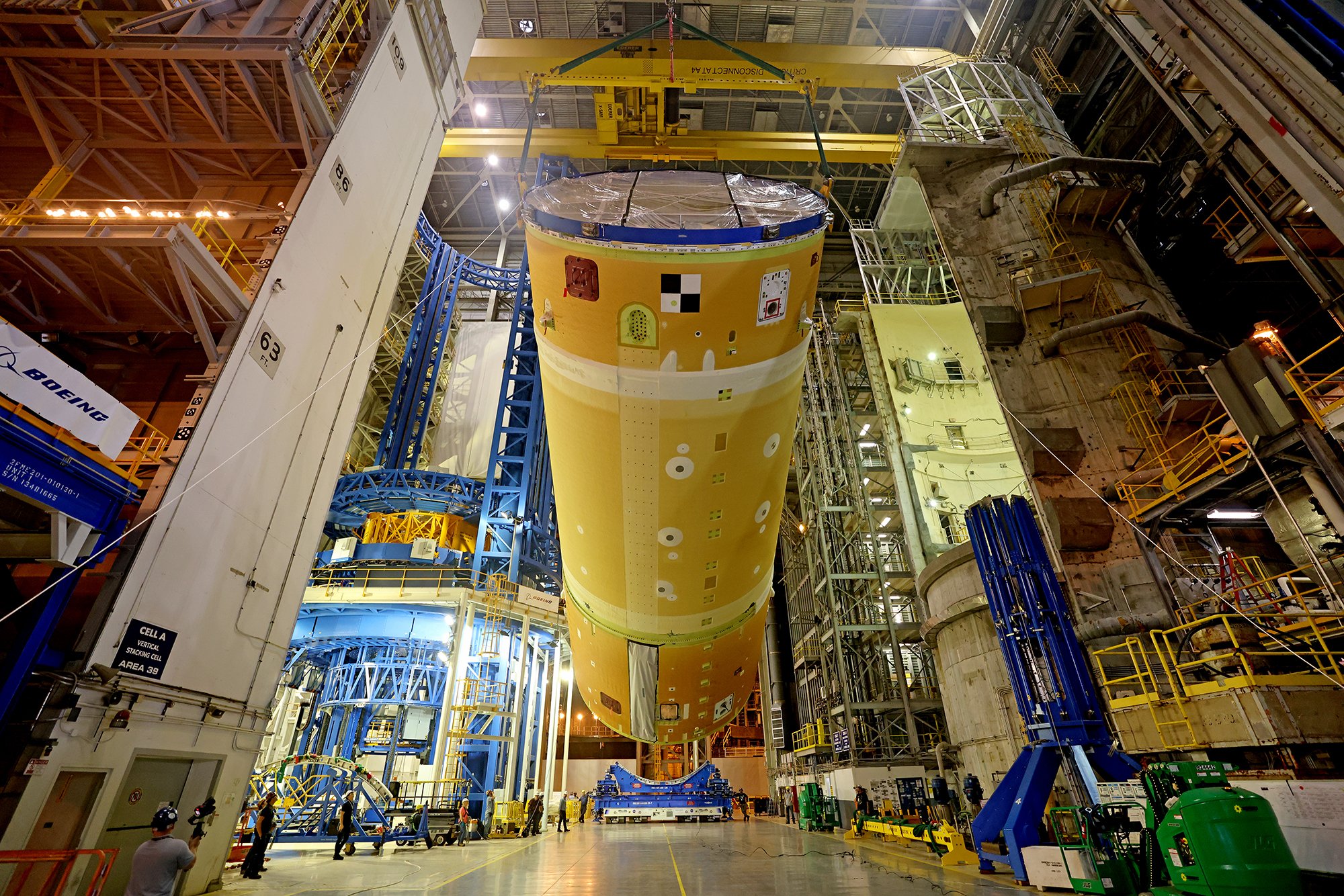 Despite poor performance from Boeing, NASA gave the company 86 percent of all available award fees for developing the rocket core, according to the NASA Office of Inspector General.
Credit: NASA


That’s a key difference between the SLS and SpaceX Starship, which isn’t tethered to decades-old technology or inefficient contracts. Elon Musk’s heavy-lift rocket is reusable and designed to be refueled in flight, allowing it to carry more people and cargo, said Loizos Heracleous, a professor of strategy and organization at Warwick Business School. He co-wrote a book, Above and Beyond: Exploring the Business of Space.

SpaceX has proven that the United States does have other transportation options, regardless of recent comments from Russia’s space agency chief, Dmitry Rogozin. Russia decided to stop supplying rocket engines to America following U.S. sanctions over the invasion of Ukraine.

“In a situation like this, we can’t supply the United States with our world’s best rocket engines. Let them fly on something else, their broomsticks, I don’t know what,” Rogozin, head of Roscosmos, said on state Russian television last week, according to news wire reports. 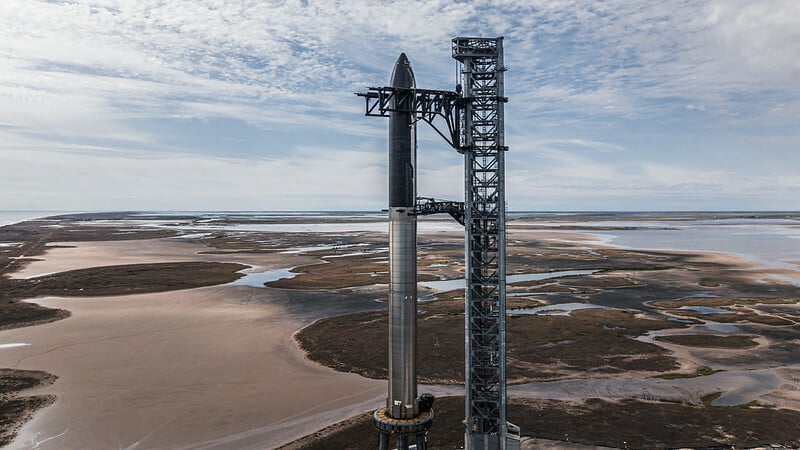 SpaceX doesn’t publicly disclose its financials, but at an event at its Texas facility last month, Musk announced he believed Starship could fly orbital missions for under $10 million per launch in as little as two or three years. (Though Musk has a history of overpromising technological targets.)

If true, that would be “several orders of magnitude cheaper than the SLS,” Heracleous said. It would be a classic case of commitment bias for the United States to stick to its guns because of the time and money already invested into SLS, he said.

“This means that good money is being thrown after bad, rather than cutting one’s losses and going with the better option,” he said in an email. 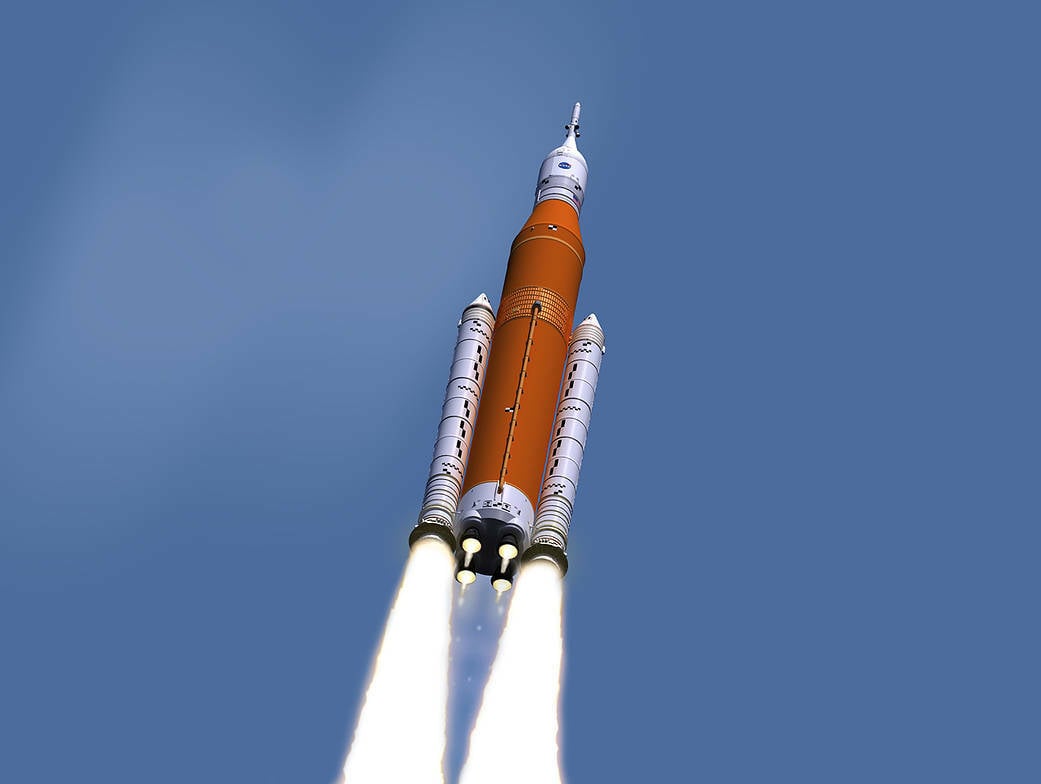 In this artist rendering, the NASA Space Launch System, or SLS, rockets a crew of astronauts to the moon in the Artemis II configuration of the vehicle.
Credit: NASA / MSFC

When legislators mandated SLS into existence in 2011, the commercial space industry didn’t have a spacecraft or rocket to send astronauts anywhere. And there are reasonable concerns for allowing a private company to handle the launching system, Dreier said. When Musk wrote to his team that a crisis with the Raptor engine production on Starship threatened to bankrupt the company, skeptics of space exploration privatization pointed to it as an example of why the United States has to have its own rocket.

“You’re putting the entire national goal on the whims of one company.”


“You’re saying that this one privately held company that is under the sway of a very powerful, influential individual whose vision drives the company, if anything happens to him or that company, the U.S. has no assured way to get astronauts to the moon,” Dreier said. “You’re putting the entire national goal on the whims of one company.”

The last three Apollo missions in the 1970s — 15, 16, and 17 — cost about $3.8 billion each when adjusted for inflation, Dreier said. That makes the Artemis missions look significantly overpriced. Launching more frequently could reduce the cost, but NASA only plans to blast off once per year.

Given that the cost of running the entire International Space Station is about $4 billion annually, it’s not surprising that the inspector general found the SLS cost unsustainable, said Matthew Weinzierl, a Harvard Business School professor who researches space economics. 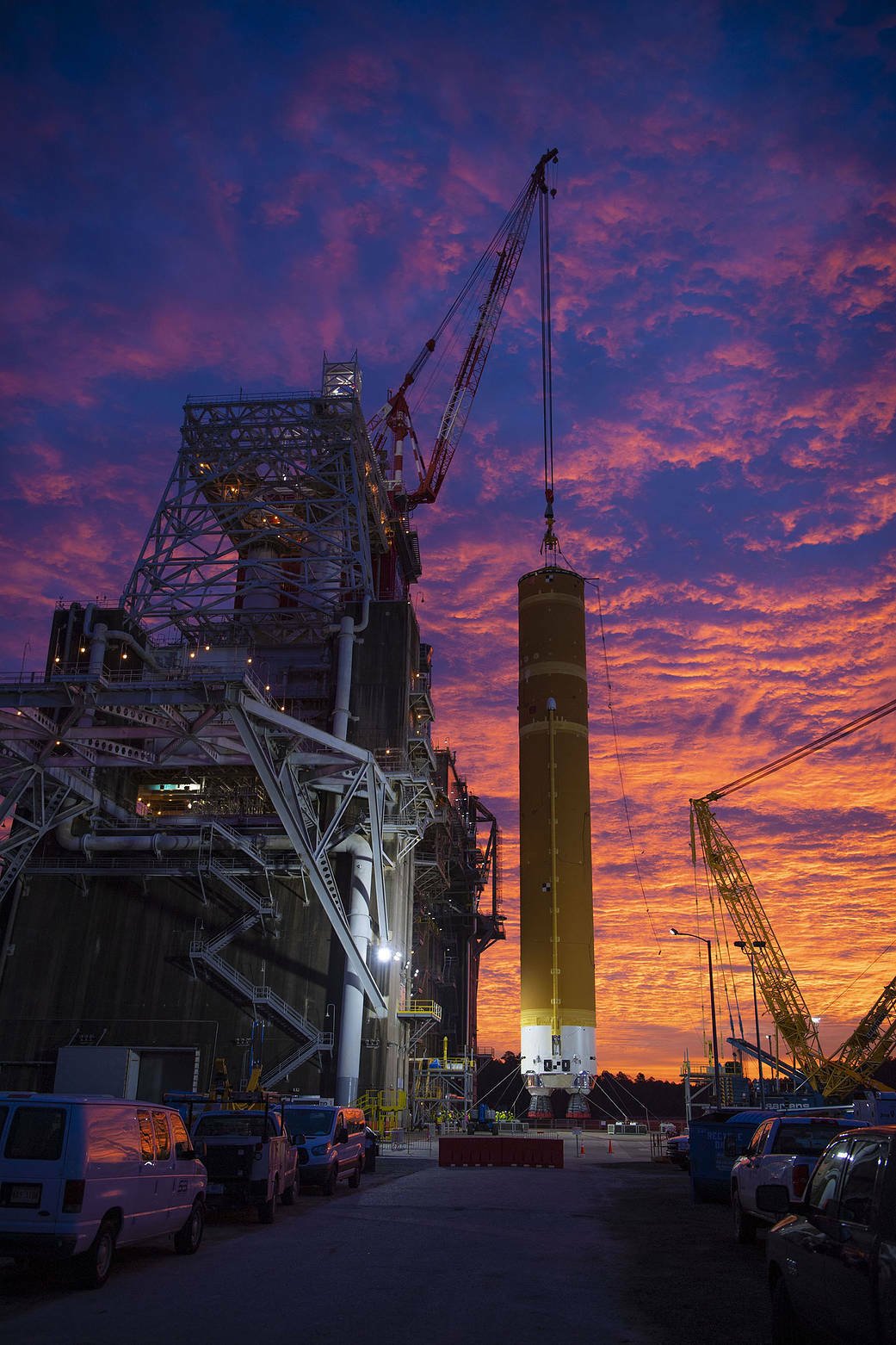 NASA’s SLS rocket could cost $93 billion by 2025, according to the Office of the Inspector General.
Credit: NASA / SSC​

“Of course,” he wrote in an email, “Congress could easily make it ‘sustainable’ if it were to increase its allocation to space and if it felt Artemis was worth the investment.”

At this point, there’s no reason to believe legislators have lost the political will for the endeavor or their beast of a rocket, apropos for the program’s namesake Artemis, Greek goddess of wild animals. Time and again, Congress has given more money to the program than the White House has requested.

At the recent Artemis mission hearing, Congressman Brian Babin, a Republican representing Houston, made his priorities clear. Where does NASA plan to run mission control, he asked?