I drove the Rivian R1T truck. It’s the most adventurous EV yet.

As a left coast urbanite, I’m not exactly what you would call a truck guy. (Fifteen to 20 mpg when the world is warming and gas is pushing $5 a gallon? No thank you.) But I’m definitely an electric vehicle guy (most recently while testing the Lucid Air) and a self-sufficient camping out in the elements kind of guy (including at a dozen Burning Mans). So while I was wary about my first ever truck drive being an off-road test of the Rivian R1T — an electric truck now shipping to early customers in its $73,000 launch edition and garnering great reviews along the way — I also seized the opportunity like it was an oversized steering wheel.

Good thing I did, because the R1T just shot to the top of my list of dream vehicles. Turns out that trucks are a blast to drive, especially when they’re studded with 10 cameras feeding to a 16-inch screen that can help you navigate even the muddiest downhill furrows. Turns out that when you take mpg worries and range anxiety out of the equation (the R1T launch edition gets 314 miles to a charge, which puts it in the same range as a Tesla Model 3; the company is promising a 400+ mile version in 2022), off-roading and camping become much more doable for the eco-conscious urbanite.

As many of the reviews have noted, Rivian seems to be selling its launch vehicle as a kind of “Patagonia” or an “REI” truck. But that’s not just marketing bluster. It really is supremely easy, if not cheap, to pop up a tent on top of the truck, either on the flatbed or the roof, with a couple of crossbars at $450 each. Just add some well-staked-down shade, and you’ve got the perfect Burning Man truck camping setup. 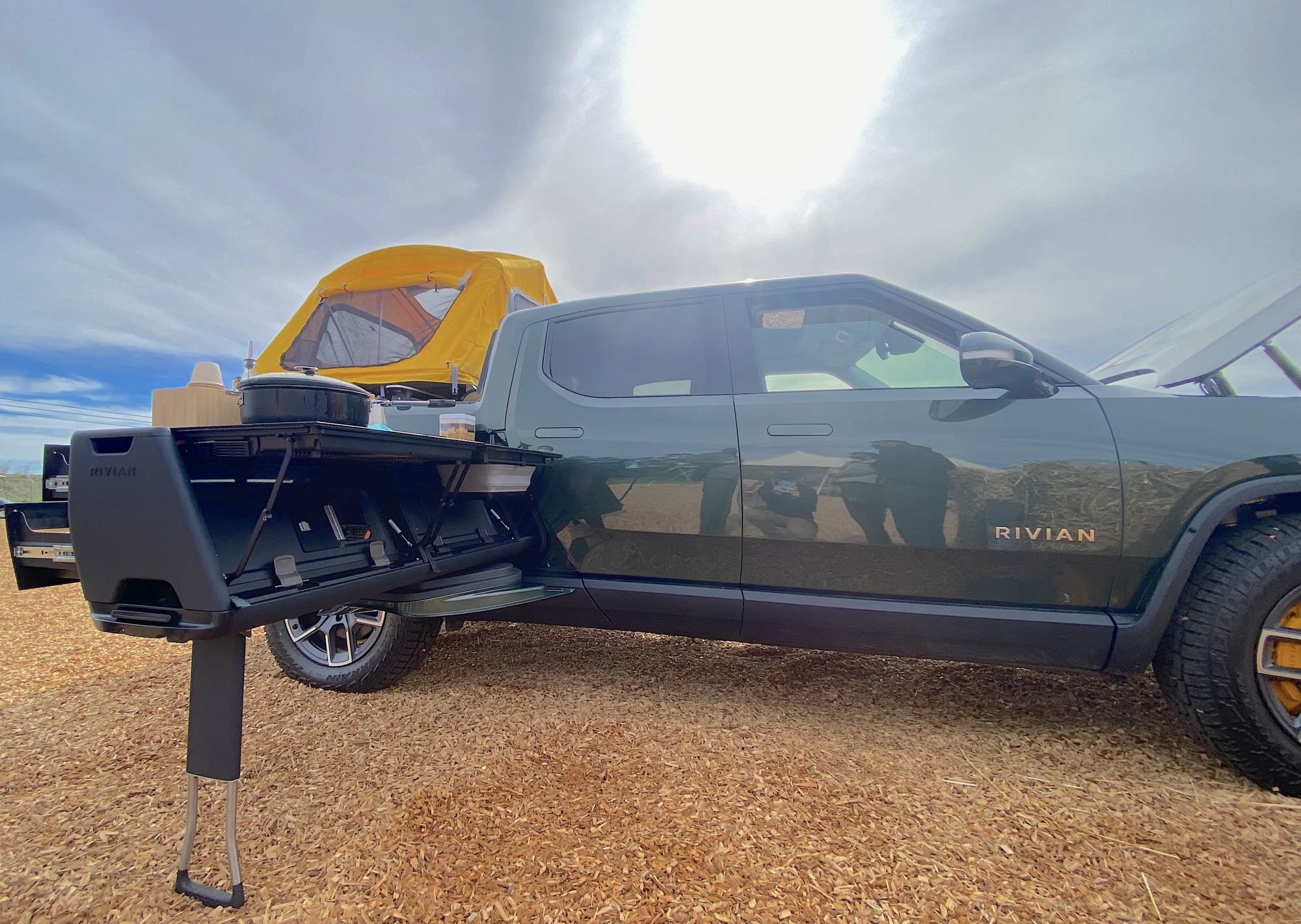 The $5,000 “camp kitchen” attachment is also optional, but Rivian has done its level best to make it desirable. All of the plates, bowls, cutlery, and equipment you need for a cookout — including the essential coffee pot — are secreted in well-designed drawers. A couple of induction stoves can cook for hours and still not deplete the car battery by more than a single mile of range. And the whole thing slides into a kind of donut hole storage area in the middle of the vehicle that’s also accessible from the rear of the cabin. Which, together with the frunk and the flatbed itself, give the R1T an impressive 68 cubic feet of storage.

To make sure I wasn’t just being dazzled by my intro to truck camping world, I brought along my friend Larry, who is a truck guy. (He once went to Colorado o get a particular options package on his Ford F-150 even though he’d have to drive it back to California — that kind of truck guy.) Moreover, Larry is thinking of replacing that F-150, the most popular gas vehicle in America, with an electric truck. He’s prime Rivian demographic, and has been eyeing the R1T for some time — but also might hold out for the F-150 Lightning, the Ford EV set to launch in 2022. Would the R1T turn his head?

When it came to off-roading, the answer was a very clear yes. The word Larry kept returning to was “nimble.” The R1T, smaller and lighter and with better suspension than the F-150, was simply more fun to navigate around curves (including at some roller-coaster-like 20-degree angles) and up and down hills.

Meanwhile, the surround sound system was able to handle an entirely appropriate Queen soundtrack without smothering us in too much bass. Larry did note that the cabin of the R1T was simply not as comfortable as its Ford counterpart. Having just driven an hour with the F-150 seats massaging our backs and butts, I was inclined to agree. It’s not that it felt smaller; if anything, the flat tinted glass roof made the cabin feel more spacious than it is (just as the more curved glass roof in the Lucid Air does). But the comfort of the seating, dinged by some reviewers for not standing up to the demands of long-distance driving, reminded me more of the flimsy Chevy Bolt than the well-designed Lucid seating experience.

However, that wasn’t the feature that turned Larry off the R1T for now. It’s the fact that Rivian doesn’t provide Apple CarPlay, which has become indispensable to him thanks to its inclusion on the F-150. It also doesn’t offer Android Auto. That’s almost certainly because Amazon is an investor, and the R1T comes with Alexa integration. The truck’s software interface is a little on the confusing side, though company reps were anxious to remind us that it would be rapidly updated over the air. But not shipping with the two most popular car systems for the two most popular types of smartphone seems like an unforced error.

Regardless, the R1T should turn a lot of heads among urbanites looking to unleash their inner adventurer. With the F-150 Lightning and Tesla’s Cybertruck going on sale in 2022 (allegedly starting at $42K and $40K, respectively), we may be about to enter a golden age of blue-state truck enthusiasts, and intense competition between the three models that can only benefit the consumer. But if you just can’t wait to get your camp on, the cookout-friendly and nimble Rivian truck is your best bet yet.