Prime Day is famously a great time of year to score a new TV, particularly ones equipped with Amazon’s own Fire TV platform.

A remarkable deal on an Insignia Fire TV has emerged two-ish months before Prime Day’s predicted calendar slot. But Amazon isn’t the place to find the steal — it’s Best Buy. The Insignia 55-inch F50 Series QLED Fire TV is on sale (May 17 only) for $329.99, banking $170 in savings.

This deal is so remarkable for a few reasons: Firstly, $329.99 is a pretty phenomenal price for any solid 55-inch 4K TV, even if it’s just LED. The fact that this one brings vibrant quantum dot technology home for that price is rare, as evidenced by the other 55-inch QLED prices in our big list of the week’s best TV deals.

Best Buy’s $329.99 also beats the lowest price that this TV has ever seen at Amazon by $20. (The 55-inch F50 is now sold out at Amazon.) That listing also reveals the fact that Amazon has the 50-inch version of the F50 Series on sale for $329.99 — meaning you’re essentially scoring an extra five inches of screen for free by purchasing at Best Buy.

Compared to regular LED, QLED TVs lay an extra layer of tiny quantum dot particles onto the LCD panel to emit a brighter range of over a billion colors. Heightened picture quality is noticeable through more intense yet accurate saturation and crispy contrast with a better grasp on dark scenes. 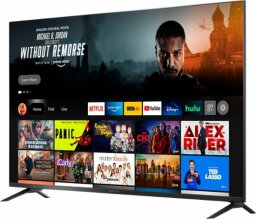 TikTok is removing millions of accounts that spread misinformation

Best Apple Watch deals as of Sept. 27 include the new SE with cellular