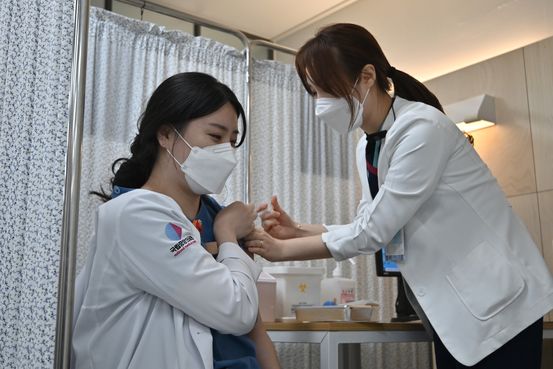 As late as last autumn, suggesting that countries where Covid-19 outbreaks had been suppressed or controlled would suffer a longer-lasting shortfall in consumer demand than the U.S. would have seemed fanciful. It no longer does.

The glacial speed of vaccination programs in many parts of the Asia-Pacific will mean social distancing and travel bans deep into the second half of 2021—and potentially beyond. Currently, China has deployed fewer than six vaccine doses per 100 people, according to Our World in Data, compared with the U.S. figure of 38 and the European Union’s 13. Developed economies in the region trail even further behind: South Korea, Japan and Australia have each deployed fewer than two doses per 100 people.

Korea is a particularly good example of the economic pitfalls ahead. Real GDP overall fell by around 1.2% between the end of 2019 and the end of 2020, strong by global standards. But that figure was buoyed by 1.2% rises in exports of goods and services. Private consumption actually fell by 6.5%, worse than the 3.4% fall in the U.S.

Market movements on Tuesday showed that investors’ patience with varied speeds of reopening is limited. After Hong Kong and Macau suspended the use of BioNTech vaccines over a packaging issue, local stocks headed south: By midafternoon the domestically exposed Hang Seng HK 35 index was down around 2% and Macau casino stocks Wynn Macau Ltd. and Sands China Ltd. had lost 5% and by 4%.

The economic costs of falling out of step with the U.S. in particular are considerable. For now, the Federal Reserve is committed to holding short-term interest rates low even if inflation ticks above its target for a brief period. But that doesn’t mean the day of tighter U.S. monetary policy will never come. When it does, economies—particularly those with a lot of dollar-denominated debt—won’t want to be still in the early stages of their economic recoveries.

Share
Facebook
Twitter
Linkedin
Email
Previous article‘This Is the Fire: What I Say to My Friends About Racism,’ by Don Lemon: An Excerpt
Next articleSave on a teeny-tiny pair of noise-canceling earbuds

Why Resisting Change Will Only Hurt Your Business