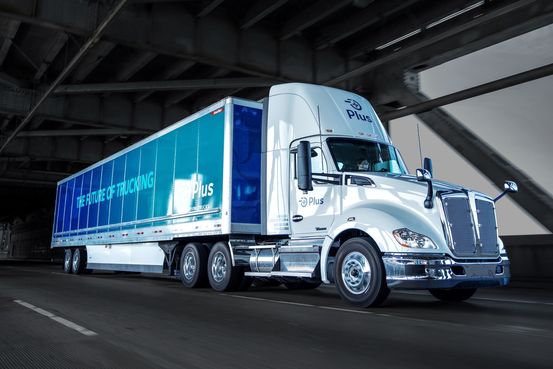 Autonomous truck companies are looking to public markets for financial backing as they try to take their technology into full production at a commercial scale.

PlusAI Corp.’s agreement to merge with a special-purpose acquisition company could make the startup the second autonomous driving provider to list on a U.S. exchange, after rival

made its debut last month in a $1.35 billion initial public offering on the Nasdaq stock market.

Plus plans to merge with

in a transaction that would bring the company, which is based in California and China, about $500 million in gross proceeds and a market capitalization of roughly $3.3 billion.

The agreement is expected to close in the third quarter, the companies said Monday.

The deal would provide “a significant cash infusion for us to expand our commercialization efforts,” Plus Chief Executive and co-founder David Liu said, as the company steps up production and aims to fill thousands of contracted orders and vehicle reservations from Chinese and U.S. fleets.

Top news and in-depth analysis on the world of logistics, from supply chain to transport and technology.

The planned listing and TuSimple’s recent IPO follow a shakeout period in the autonomous trucking sector, where companies need large amounts of capital to develop technology that is several years out from mass commercial deployment. Some startups sold to other companies last year, and analysts say investors are increasingly concentrating money behind a few prominent ventures.

Plus has received around $600 million in total funding, Mr. Liu said. The company raised $420 million this year, accounting for more than 70% of the $584.9 million that research firm PitchBook Data Inc. said venture-capital investors have poured into self-driving trucking companies so far in 2021. Plus declined to comment on its most recent valuation.

Plus, like TuSimple, has strong ties to China and has raised hundreds of millions of dollars in financing from Chinese and U.S. investors.

Founded in 2016 in Silicon Valley, the company also has research and development offices in China, where Plus plans to start mass production of its self-driving systems this year through a partnership with Chinese truck manufacturer FAW Jiefang, part of state-owned FAW Group Corp. The company also has an agreement to develop autonomous trucks with Iveco, equipment-maker

NV’s Italy-based commercial vehicle brand, for use in China, Europe and elsewhere.

Plus said it has signed a deal to provide 1,000 trucks retrofitted with its technology to a large U.S. private trucking fleet, and delivered the first batch in February. Mr. Liu declined to name that customer, citing a nondisclosure agreement, but said Plus is working with several U.S. shipping companies and trucking fleets and that many are running pilots of its technology.

Plus plans to deploy about 160 trucks this year in the U.S., scaling up to around 1,300 in 2022, according to an investor presentation.

“Our backlog already basically extends ourselves into 2023,” Mr. Liu said. “We’re just trying to make sure that we can actually increase our production and make sure our technology and products are robust and reliable enough to meet the demand.”

Other autonomous-vehicle startups that also focus on passenger vehicles are stepping up efforts to develop autonomous technology for freight transportation.

“The market is validating the view that self-driving trucks will arrive well before robotaxis,” said Asad Hussain, senior mobility analyst at PitchBook. He said widespread deployments of autonomous trucks will likely occur in the early-to-mid 2020s compared with the mid-to-late 2020s for self-driving cars.

Plus said it plans to reach full autonomy with its trucks by the end of 2024. The company expects to generate an estimated $16 million in revenue this year, and $250 million in 2022.

“We expect to be cash-flow positive by 2023,” Mr. Liu said. Plus expects to have $78 million in earnings before interest, taxes, depreciation and amortization in 2023, compared with a projected $47 million loss in 2022.

Autonomous trucking technology will have to navigate regulatory and other hurdles to reach broad acceptance, including concerns about the safety of driverless trucks hauling thousands of pounds of freight on public highways.

Rachel Binder, managing analyst for transportation and mobility at market-intelligence firm CB Insights, said investors are interested in the sector because of the savings that driverless technology could provide through reduced labor costs and increased efficiency.

“But I think the sentiment is, ‘Let’s put our money behind the strongest players,’” Ms. Binder said.

Write to Jennifer Smith at jennifer.smith@wsj.com

Share
Facebook
Twitter
Linkedin
Email
Previous articleSnag a fast, reliable router for only $55
Next articleMarjorie Kinnan Rawlings, a Novelist Who Went on a Quest for an Authentic Life