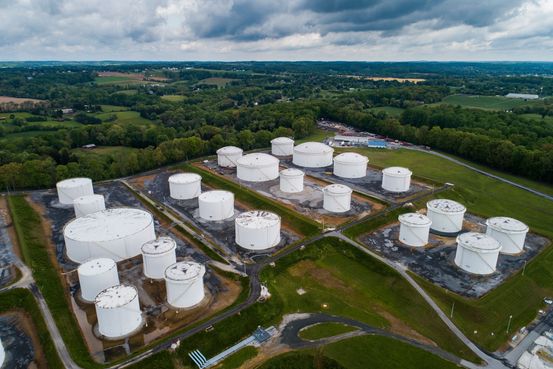 The cyberattack that forced the closure of the top U.S. fuel pipeline threatens to disrupt gasoline supplies for millions, as the conduit’s owner estimated Monday that restoring service would take at least through week’s end.

The new timeline for the Colonial Pipeline, a 5,500-mile system from Texas to New Jersey, came as the Federal Bureau of Investigation said it believed the attack involved a criminal gang with Eastern European ties known as DarkSide.

Colonial Pipeline Co. said Monday it hoped to substantially restore service on the pipeline, which it shut Friday, by the end of this week.

The Colonial Pipeline transports about 45% of the fuel consumed on the East Coast, according to the company’s website. The Alpharetta, Ga.-based company said that restoring its network, in coordination with the Energy Department and other federal agencies, will take time, and that it was bringing segments back online in stages.

DarkSide created the malicious code that resulted in the Colonial Pipeline’s shutdown, FBI officials said Monday. The organization is a relatively new hacking group that Western security researchers say is likely based in Eastern Europe, possibly in Russia.

The group posted a statement earlier Monday claiming that its sole goal was to make money and denied it was connected to a foreign government. It didn’t mention the Colonial Pipeline or how much money was being demanded.

“We are apolitical, we do not participate in geopolitics,” the group said in the statement.

The Biden administration issued an emergency waiver extending hours for truck drivers delivering fuel across 17 states, including several across the southeastern U.S. that depend on the pipeline for much of the fuel they consume.

President Biden said Monday that he is prepared to take additional action, depending on how much time is needed for the pipeline to resume operations. He said ransomware was a growing problem in need of a global response and that more investment in critical infrastructure was necessary to safeguard critical systems from debilitating cyberattacks.

Mr. Biden and others said the Russian government didn’t appear to have a hand in the attack, but he criticized Moscow for tolerating criminal hackers within its borders.

“So far, there is no evidence from our intelligence people that Russia is involved,” Mr. Biden said. “Although there is some evidence that the actors’ ransomware is in Russia. They have some responsibility to deal with this.”

Energy markets were volatile in response to the pipeline disruptions. Gasoline futures in New York ended the day up 0.3% at $2.13 a gallon, after they had advanced as much as 4.2% in overnight trading. But analysts said prices for gasoline, particularly spot prices in regions affected by the closure, could continue to rise if the pipeline isn’t back in service in a few more days.

Gasoline prices have been surging, pushing up the national average price of a gallon of regular, unleaded gas to $2.96 a gallon, according to the AAA. That national average could soon pierce $2.99 and hit a 6 ½ year high. Gasoline prices could rise 3 cents to 7 cents a gallon this week in affected areas such as Mississippi, Tennessee and East Coast states from Georgia to Delaware, the automobile association estimated.

Even a roughly weeklong delay could reduce the amount of fuel held in stockpiles. That would likely amplify pressure on consumers at the pump, with demand set to rise in the coming weeks as more motorists travel after receiving coronavirus vaccines, said

director of the futures division at Mizuho Securities USA.

“That’s still significant enough to make a difference,” he said. “This just shows how fragile the situation is.”

“Every hour counts at this point as we get closer and closer to Memorial Day weekend,” he added.

Some consumers were bracing for continued fuel-price increases, which come as prices also surge for items as diverse as food and appliances.

“Gas is so volatile to begin with that adding another factor is just another aggravation,” said Matt Jackson, a 40-year-old judicial aide and paralegal student in Philadelphia who travels 10 miles every business day to and from the court building where he works.

Mr. Jackson noticed that a gallon of regular, unleaded gasoline cost more than $3 on his drive home Monday afternoon and was bracing for prices to continue rising ahead of a planned Memorial Day trip to the New Jersey shore.

“I’m just going to watch it more closely,” he said.

“
‘This is happening at the worst time, heading into the summer, and also to the most vulnerable area.’
”


Southeastern states from Alabama to Maryland could experience sporadic outages and a scramble for fuel supplies later this week. Limited fuel supplies in Tennessee are particularly concerning, as the state is highly dependent on the pipeline, said

Gasoline futures prices have surged and are up more than 50% in 2021.

“This is happening at the worst time heading into the summer and also to the most vulnerable area,” said

managing director for global energy strategy at RBC Capital Markets. The East Coast is the least energy-secure U.S. region because of the dearth of refineries there, he said.

Traders were preparing for a rise in European fuel exports to the U.S. Shipments from the continent have tended to rise after similar disruptions, including a 2016 Colonial Pipeline shutdown following a leak. Weekly Wednesday government updates on U.S. energy stockpiles, imports and exports will now be in even greater focus, analysts said.

The cybersecurity recovery for the Colonial Pipeline could take a few more days, and possibly longer, said

a director of industrial-control system security at consulting firm 1898 & Co., part of Burns & McDonnell in Houston.

“Given the breadth of the unknowns, the discovery, containment, decontamination and remediation effort will be lengthy and likely result in a gradual return to operations,” Mr. Ayala said.

Cyberattacks and the Energy Sector

Related coverage selected by the editors:

—Robert McMillan contributed to this article.

Write to Collin Eaton at collin.eaton@wsj.com, Amrith Ramkumar at amrith.ramkumar@wsj.com and Dustin Volz at dustin.volz@wsj.com